Professor Nicholas A. Peppas has been elected a Corresponding Member of the Real Academia Nacional de Farmacia (Royal Academy of Pharmacy of Spain). 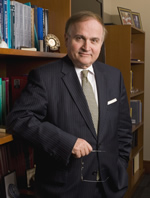 Established in 1737 by King Philip V, the Royal Academy of Pharmacy of Spain is one of the Royal Academies belonging to the Institute of Spain under the reigning King of Spain, Juan Carlos I. The Academy is composed of 50 academicians and 173 corresponding academicians worldwide, who represent excellence and the highest scientific and intellectual merit in the field.

Gregory L. Fenves, dean of the Cockrell School of Engineering, hailed Peppas’ induction into the Spanish academy as a testament to his fundamental research and educational contributions internationally.

“Dr. Peppas is one of the foremost pioneers of drug delivery research, and his contributions to science — both through research and mentorship of students — have and continue to improve life for many,” Fenves said.

Peppas will be inducted and give an inaugural lecture in Madrid on April 25.

As a leader in biomaterials, drug delivery and pharmaceutical bioengineering, Peppas’ research blends modern molecular and cellular biology with engineering to create innovative medical systems and devices for patient treatment.

“My relations with academic institutions in Spain have been numerous over the past 25 years and have included collaborative research, publications and education of numerous Ph.D. students,” Peppas said. “This recognition is a huge honor for me and reflects upon all the amazing graduate students and postdoctoral fellows whom I have had in my career as well as the leading research they have contributed to the medical and pharmaceutical fields.”